-Placed on Germany paid to France and on a lesser level to the UK
-Germany couldn't even pay the interest on the reparations, but since they couldnt pay it the number would get higher.-they wanted germany to collect 55 billion dollars ( completely unpayable)
-France had the damage on their soil, so they were demanding the money.
-When France couldn't get any money they would take material form the Germans: ex: coal, iron, steel
-The germans who worked in those factories didn't want to work because the french would take their materials.
Germans = ANGRY
http://www.johndclare.net/EA7.htm


Summary: The War Reparations were placed on Germany because of what they did in the War. Germany could not pay it all because they were in debt. It was France who was demanding the money because it was their land that was mostly destroyed. 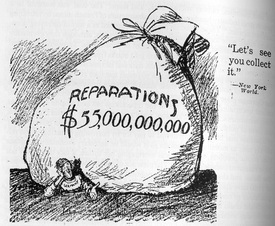 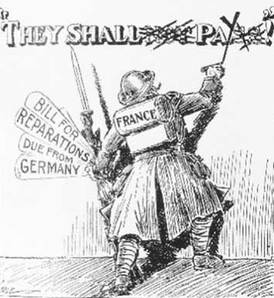