-Palace of Justice, the Hague
-Doomed form the start with the exclusion of US, Russia and Germany

Congress did not agree with Woodrow, they wanted to stay out of the group
*Woodrow-Democratic
*Congress- Republican

Isolationism= USA
-The task of the League of Nations was  to ensure that war never broke out again.
The US felt as if they didn't need to get involved in world affair and that they only need to worry about themselves. Although Woodrow Wilson came up with collective security and is american, he couldnt convince his congress/country to join.

The League of Nations was formed so that all the countries of the world would stay at peace and all make descicions together as one. It was doomed from the beginning because it did not contain USA due to their Isolationism, Russia due to their Communism, and Germany because they lost the war.

*What would have been different if either US, Russia or Germany had been a part of the League of Nations?

Summary: After the Paris Peace Conference the League of Nations was created however it was doomed from the start because US, Russia and Germany were excluded. 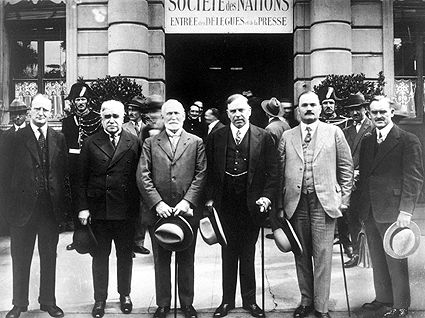